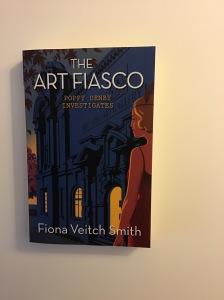 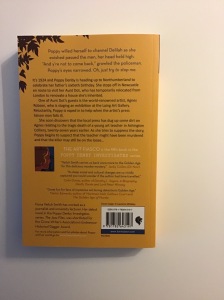 It’s 1924 and Poppy Denby is heading up to Northumberland to celebrate her father’s sixtieth birthday. She stops off in Newcastle en route to visit her Aunt Dot, who has temporarily relocated from London to renovate a house she’s inherited.

One of Aunt Dot’s guests is the world renowned artist, Agnes Robson, who is staging an exhibition at the Laing Art Gallery. Reluctantly, Poppy is roped in to help when the artist’s press liaison man falls ill.

She soon discovers that the local press have dug up some dirt on Agnes relating to the tragic death of a young art teacher in Ashington Colliery, twenty-seven years earlier. As she tries to suppress the story, Poppy begins to suspect that the teacher might have been murdered and that the killer may still be on the loose.

This is my first book that I have read by Fiona Veitch Smith and tea enjoyed it. The Art Fiasco is currently the fifth book in the Poppy Denby Investigates series.

The Art Fiasco mixes with the art world and perhaps a murder.

Inside the book is a map that readers can follow, explaining where every place is within this storyline. There is also a list of characters for each year this story is set in.

The Art Fiasco is set in the 1920s, in Newcastle upon Tyne.

At the beginning of the story in 1897, 30th September, Adhington Colliery, Northumberland . Agnes Robson is attending  Mr Michael Brownley ‘s free art class, at the Newcastle School of Art at the University college. He ran the free art classes for children of the pitmen  in Ashington and Hirst. Agnes had the flair to change the colours of trees and Mr Brownley gives her some money, but I’m not saying why.

My heart sunk, on the 14th October in The Morpeth Herald the sad news is running that lecture Micheal Brownley has been found dead at the bottom of Ashington Pit.

Poppy Denby is investigating the death of teacher Mr Brownley, where something is about to be discovered.

If you like murder mysteries, then this ﻿book could be just right for you!﻿

What has been said about The Art Fiasco by Fiona Veitch Smith.﻿

Veitch Smith carries us back once more to the Golden Age for this delicious murder mystery. Jacky Collins ( Dr Noir )

It’s deep social and cultural changes are so vividly captured you could wonder if the author had time-travelled.   Colin Duriez

Agnes Robson hurried into the church hall, smiling an apology at the gentleman in charge, and took her usual place at the easel nearest the window. The other young artists half a dozen of them, ranging from eight to fourteen were already busy with their paints and brushes. Agnes lifted the sack of her canvas to reveal a half-finished study in oils. She inhaled the fumes, allowing the familiar smell to settle her quickened breath, picked up a brush and chewed the end while she contemplated the composition.

I would like to thank Lion Hudson for sending me this paperback to read and review and for inviting me to be part of the blog tour.

Formerly a professional journalist, Fiona Veitch Smith is now an author of books for adults and children. She has also written theatre plays and screenplays. Her adult mystery series, Poppy Denby Investigates, set in the 1920s, is published by Lion Fiction. The first book in the series, The Jazz Files, was shortlisted for the Crime Writers’ Association (CWA) Endeavour Historical Dagger award, 2016. Other titles in the series include: The Kill Fee, The Death Beat, and now The Cairo Brief. For more on the Poppy Denby Investigates series including background material on the 1920s, film reels, period fashion and fabulous jazz recordings check out the Poppy Denby website: http://www.poppydenby.com/. Interested in learning more about Fiona, take a look at her website: http://fiona.veitchsmith.com/.

View all posts by Bookread2day